The morning began through two sets of eyes. One discovering a tetris-like zen to fitting swag buckets, tables, prize wheel, and our beloved K suit into the K-van. The other experiencing the hell that is biking up the slow incline on southbound West River Parkway under unseasonably windy conditions.We both survived, thanks to the good gracious coffee of the Blue Moon Cafe. 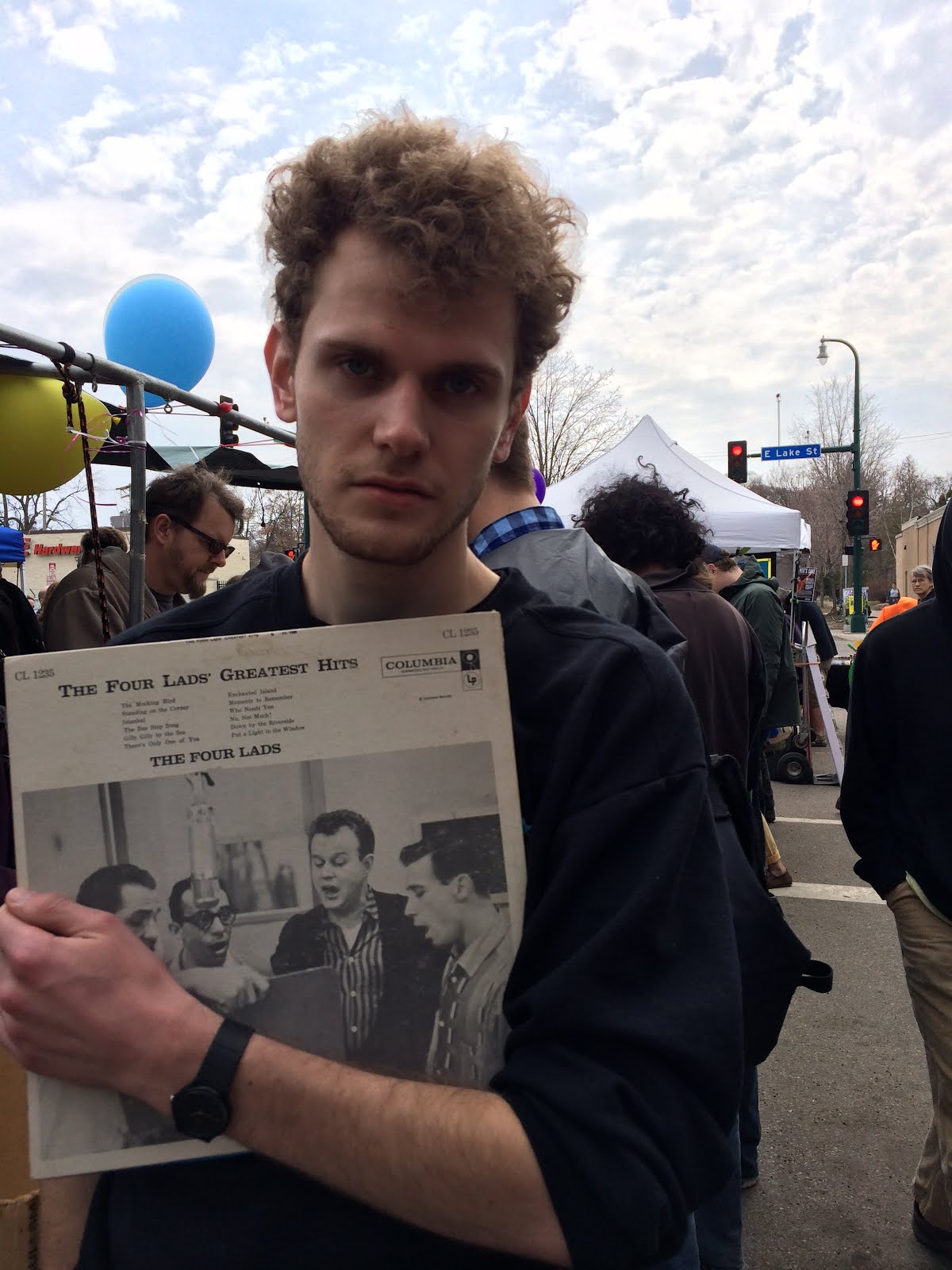 Radio K staff & volunteers arrived early in hopes of scoring some exclusive releases and free vinyl bin gems
Greg scored a Robert Cray vinyl for his dad
Brody picked up Black Flag, Minor Threat, and The Rolling Stones - oh my!
& in the exciting free vinyl section, Nathan stumbled upon a CW McCall album he took with him.

Also, picking up a vinyl solely for your name-sake. - Hey Melanie 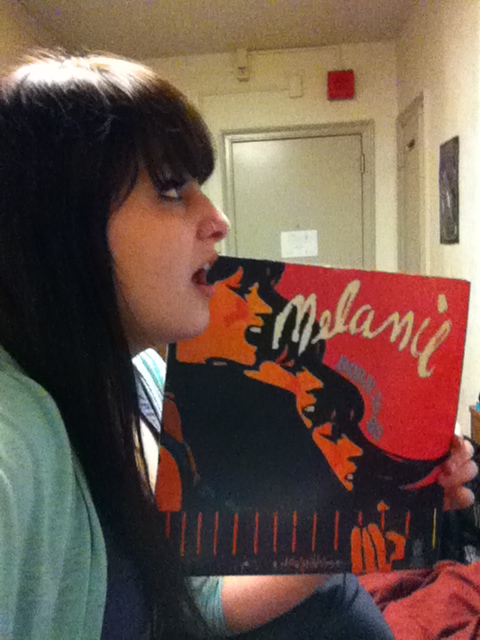 "I don't know what I enjoyed the most about record store day at Hymies! Was it browsing the ever-entertaining 'difficult listening' section? Was it hearing a great version of the Hank Williams classic, 'There's a Tear in My Beer?' Or was it when my mom sent me a text message saying that the rabbit I have had since I was a child wasn't going to live to see Monday?" - Peter

Our booth was snug in between local crafters, selling album cover notebooks and ceramics. Jio was excited that our wheel had a few wee fans who kept coming back for more that he found impossible to deny.
The K suit showed up unbenounced to us and was dancing all over the place. Many jumped at the chance to snap a pic with our beloved mascot. 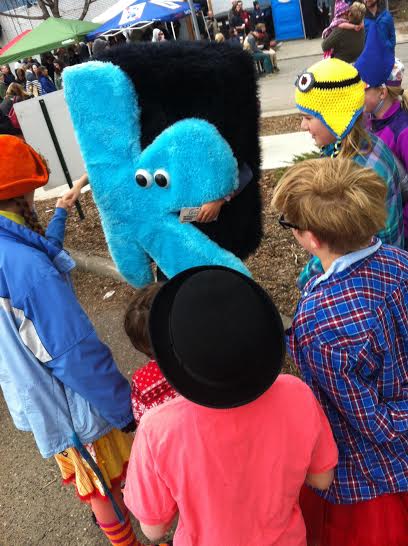 The K, doesn’t seem to frighten them the way he does my dreams…look straight into his eyes... 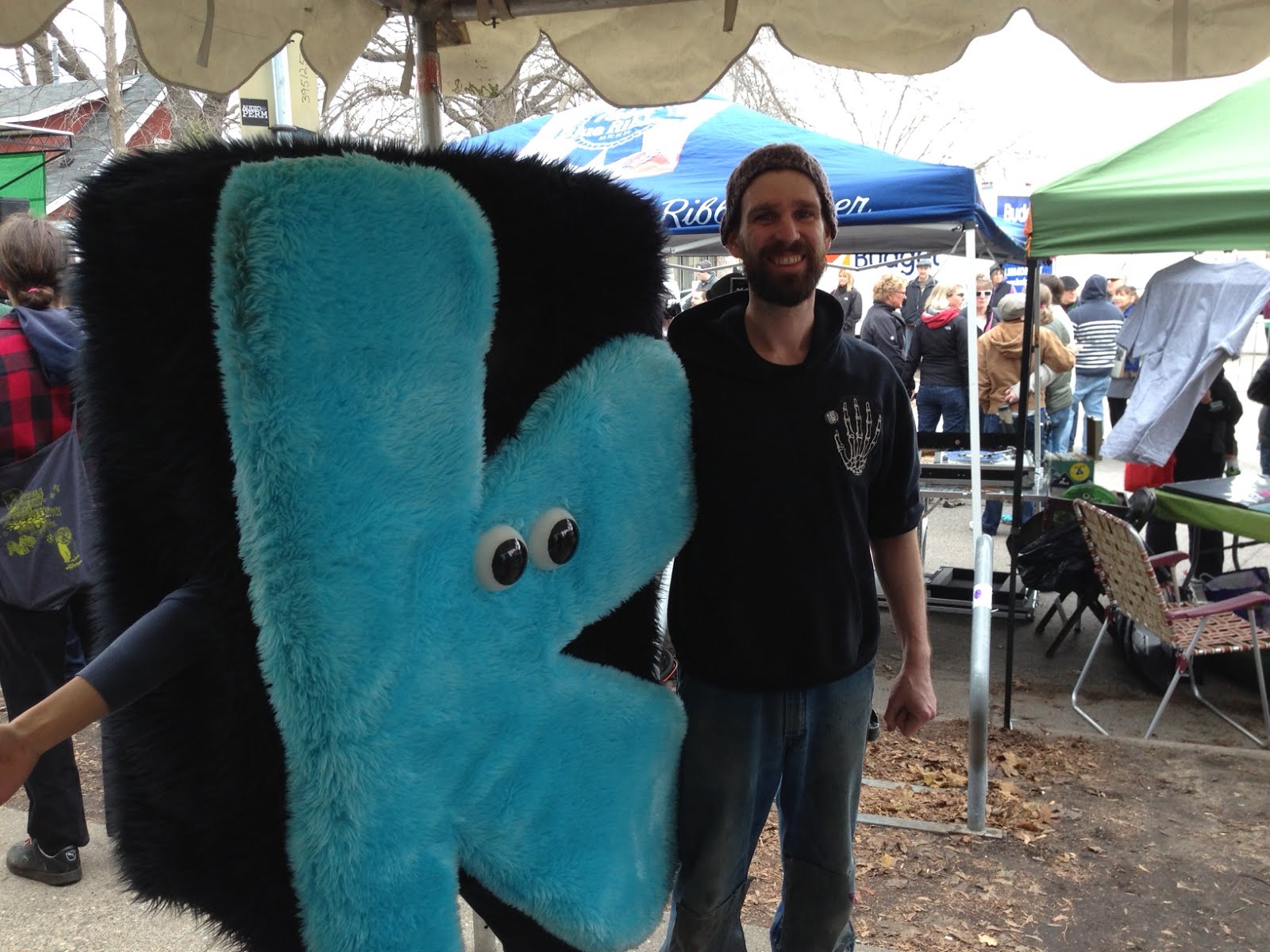 Brian Laidlaw and the Family Trade 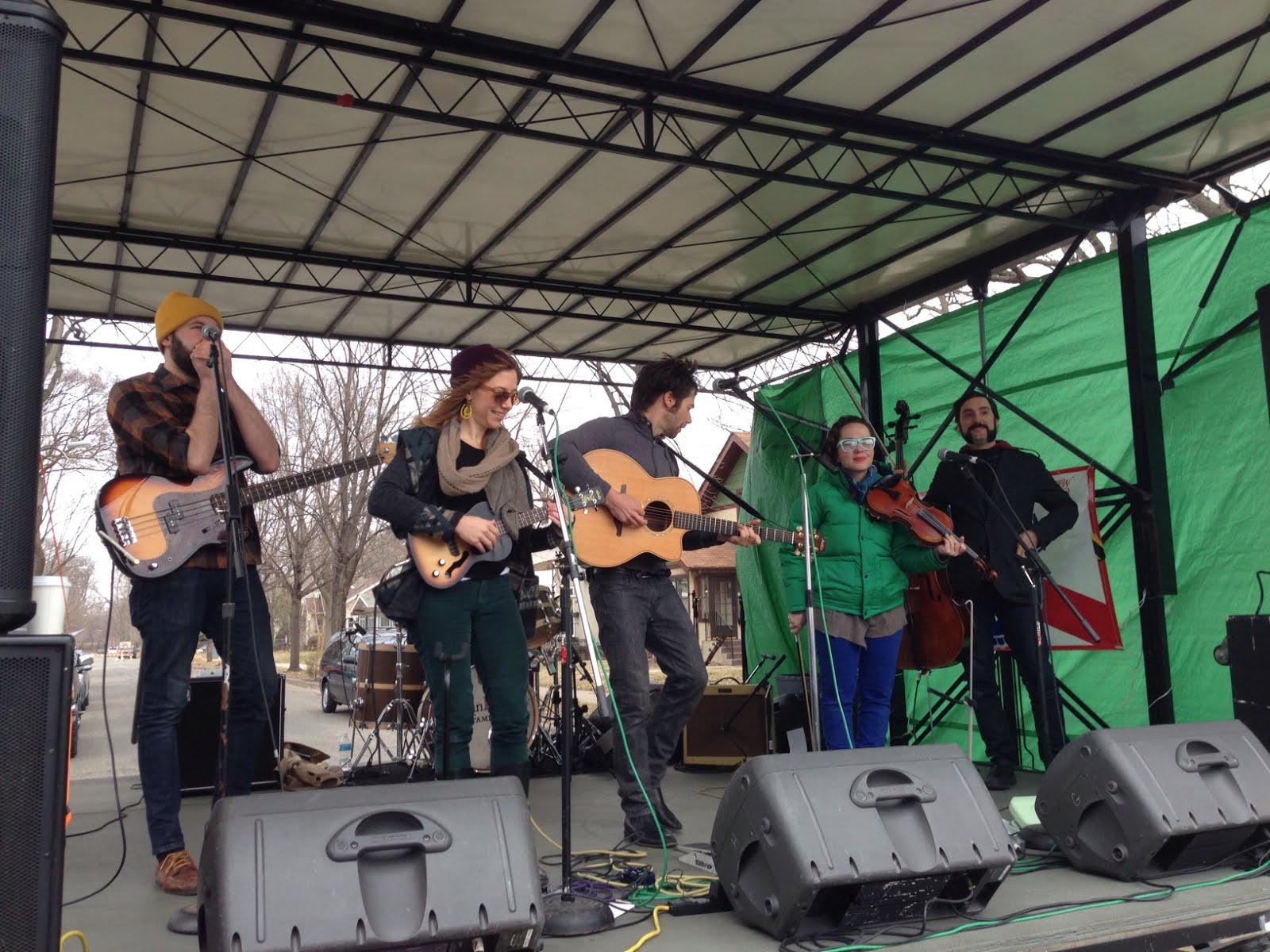 Kicking off the outdoor stage at 11am 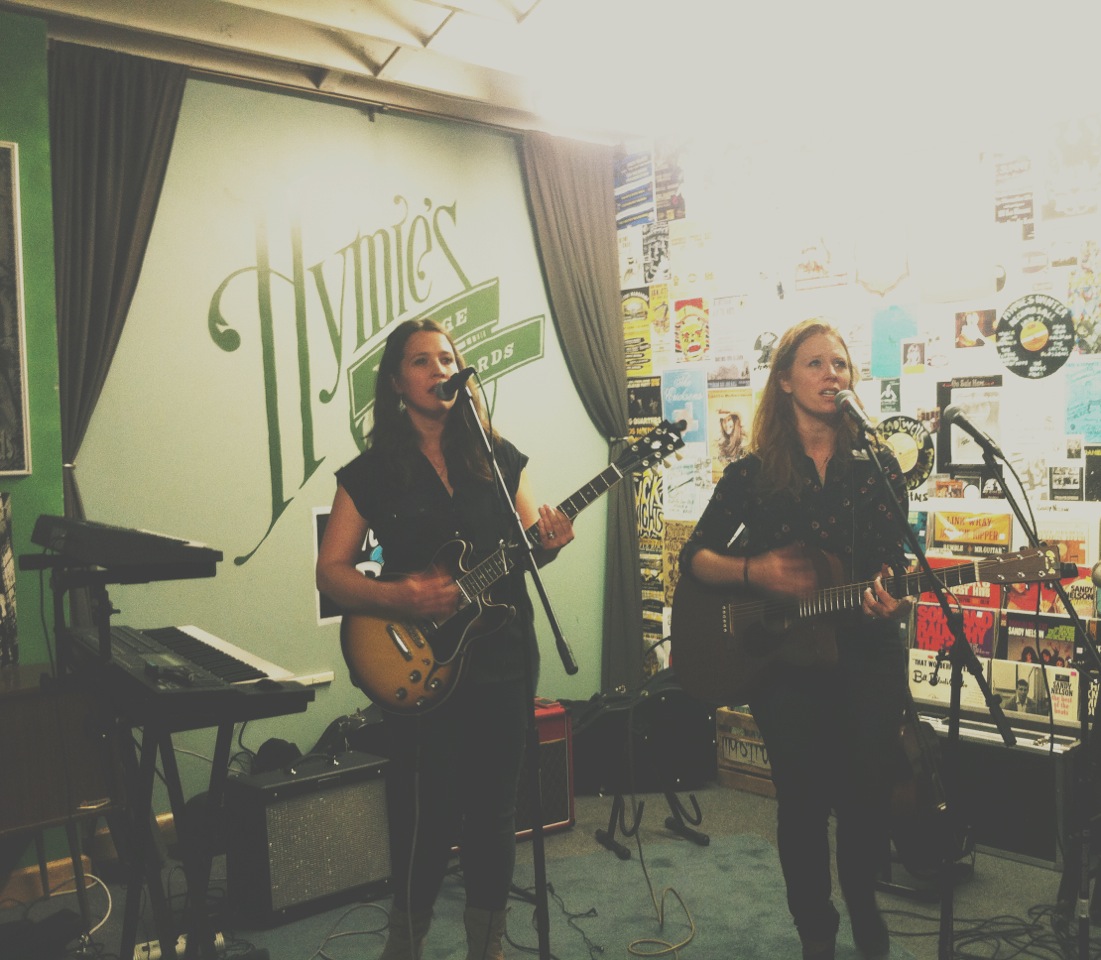 The Ericksons performed live at Hymie’s Vintage Records on the indoor stage for Record Store Day 2014. This sister duo rocked the store with folky sounds and powerful vocals as people crammed in the back room to both listen and browse through records. Volunteer Melanie, who hadn’t seen them before, was so swayed by their performance that she has now declared herself a lifetime fan. 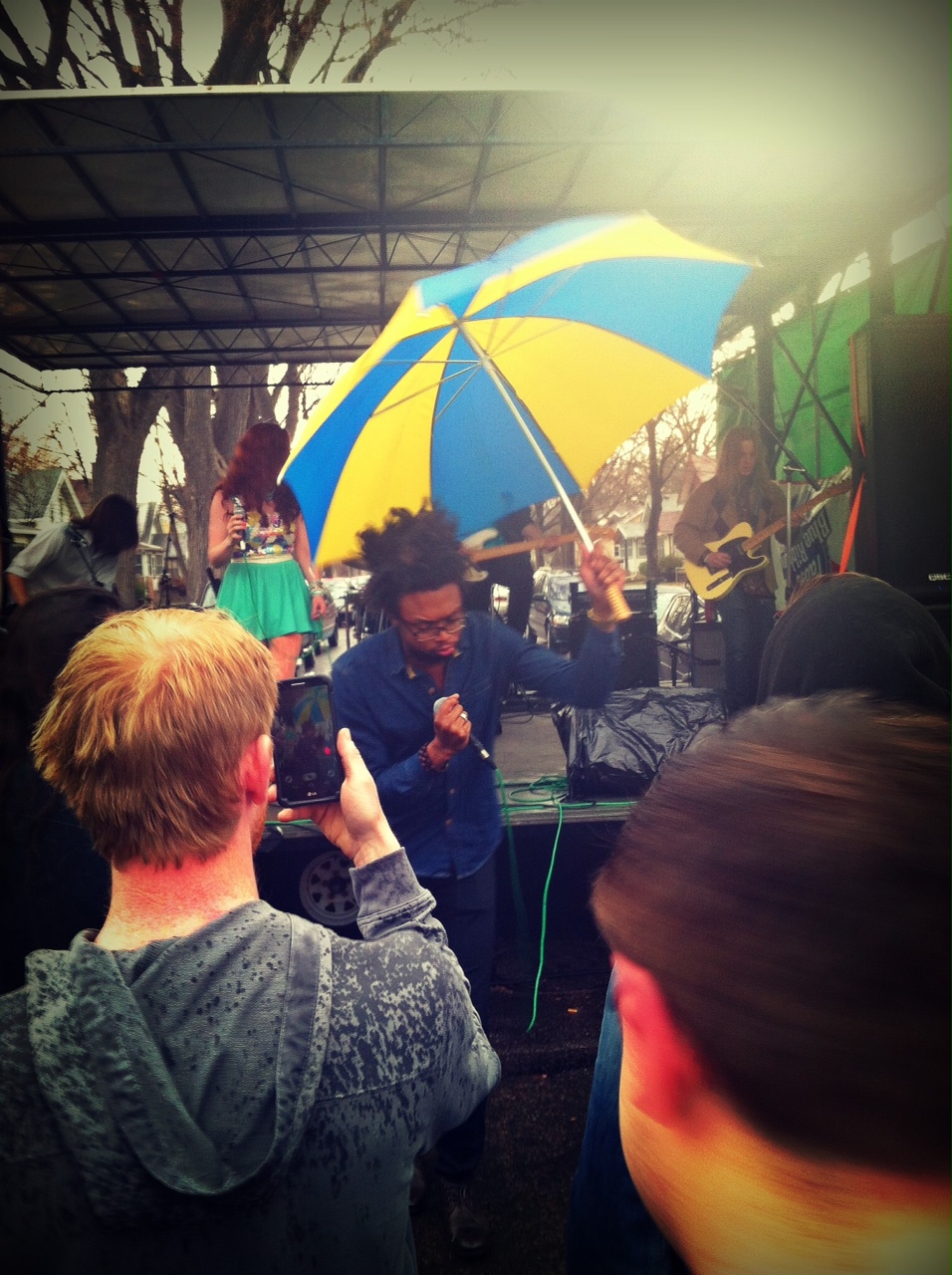 Black Diet headlined at 5 on the outdoor stage, taking the stage just as the rain began to pour down on the crowd. A little rain never stopped anyone though, and everyone stayed dancing (or alternatively hid in the beer garden) to support the main act in honor of their first album release, Find Your Tambourine.

If you're like Emily and missed your shuttle to Rochester and got stuck in the rain - it gets better, you'll catch you favorite local act and have time to make it back for holiday dinner!

Using rubber bands & plastic bags, Amanda and Melanie achieved the feat of video-taping in the rain!  Much of the audience joined our video team and let Black Diet’s music conquer over precipitation.  A little boy with a Black Diet tambourine stole the show, dancing in the front row.

The Cactus Blossoms played a set inside a bit after Black Diet ended. Melanie, Hannah and Nailah headed in to set up sound and video as the crowd packed around us, eager to hear these true and traditional local country stars. 10 minutes after the start of their set the sound guy asked politely if someone could go find the band, who appeared to be missing. Jack Torrey entered the room in a rush and hopped on the stage in anticipation. After a few more minutes, he asked if anyone had seen his brother around, the other half of The Cactus Blossoms. Once everyone was present they began a beautiful set that echoed joyfully through that back room of Hymie’s.

Southside Desire ended off the night on the indoor stage. Out on Pinata Records alongside Black Diet, members of all of the acts from the day and staff from Hymie’s crowded in the room to support their friends. Self declared “femme-fronted northern soul”, Southside closed off the night with tons of energy. You can pick up their split 7” at Hymie’s, pinatarecords.bandcamp.com, or any local record shop!

Between the waves of smiling people, the smell of rain, and the non-stop record spinning, the day was perfect. Although some of us were a bit bummed we didn’t make it across the street in time to hangout with the lizards, the festivities were endless and the event was packed with people excited for so many reasons! We were very happy to partner up with Hymie’s Vintage records for their fourth annual RSD block party and fifth anniversary of taking over this shop on Lake Street, and hope you get a chance to stop by soon and shake the lovely puppy Irene’s paws! 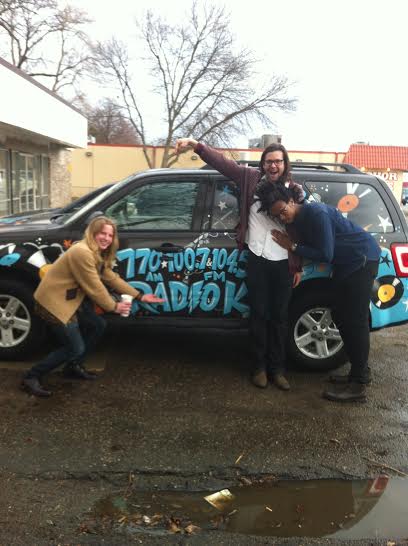 Mitch, Sean and Jonathan from Black Diet checking out the K-Van after their set!

"There were so many different types of people who were connected through that record store. Many of the musicians who played, especially indoors, owed their current positions in the music scene directly to support by Hymies. It was a community that built itself, in the sense that by encouraging new musicians, many of whom seemed to be long term customers of the store, to commit to their dreams of making music, new media is brought in to Hymies encouraging other new customers to come and listen to music. I was really proud to support something that brings people together like that, and I think Radio K kind of does the same thing. A lot of people at the booth talked about how someone they knew worked at Radio K, or that they hated losing Radio K's signal because of what it represented and the music we play. I was just happy to take part in something so universally loved." - Mikey

Our closing thoughts & stray observations about the rain, beer, dogs, and Minneapolitans

I mean - have you met Irene? She was runnin' around so fast (being chased by our Front Desk man Greg) we didn't snag a picture of her, but you can always get a shirt with her great face on it. 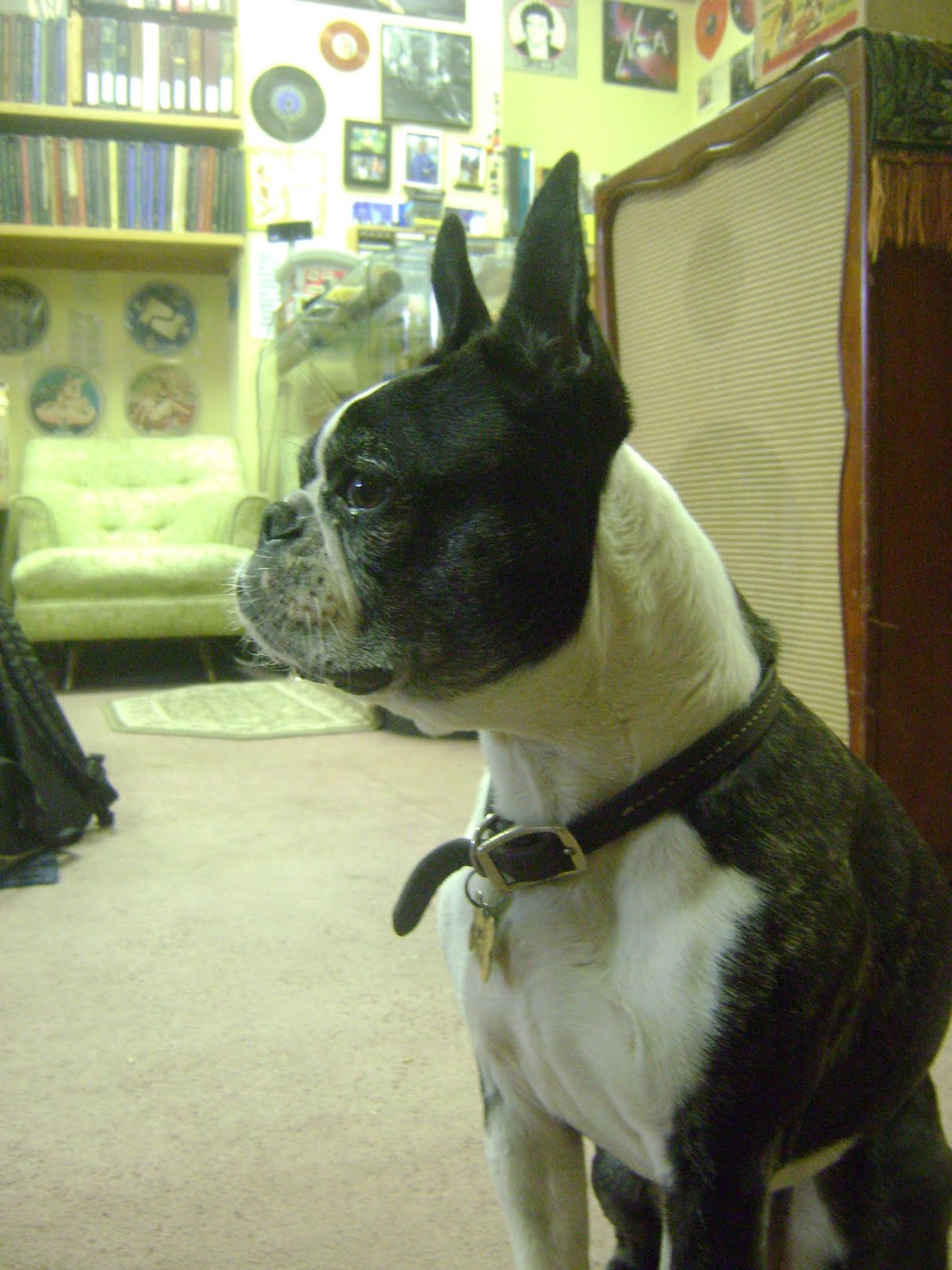 "On the walk back from Hymies, I saw a group of people standing over a dying squirrel that had been hit by a car. They were talking among themselves wondering if there was anything that they can do to save it. It was then, in that moment, I realized that looking both ways before crossing the street really is a good idea." - Peter

"Dogs running around all over the place were the best contribution to a chill atmosphere. There was one little guy casually weaving in and out of the crowd all day, checking out the performers on the indoor stage. My favorite was a very round, old, black and graying Pomeranian named Petey, who howled along when I sang You Are My Sunshine to him." - Melanie

"Dog was cute. Rain was bad. Record selection is addicting and stressful. Saw an album by someone called Dr. Roose, which involved making prank phone calls, which I thought was hilarious." - Toby

"I wonder what the proportion of people at the block party were there for the sole purpose of getting drunk. Do they really appreciate art? Or is what they are doing perhaps art?" - Peter

"I had a blast it looked like everyone else there did too! They were even giving away free vinyl! I feel bad for whoever missed it and for people who are allergic to vinyl! That would stink!" - Peter

many images courtesy of Hymies Vintage Records, many thanks to their forever kind effort, support, and mission. Thanks!

1. don't shut me down by ABBA
2. rain dance by geese
3. mold by lunar vacation
4. break it off by pinkpantheress
5. film school graduate by kids ski free
6. creator SOS by nightmares on wax
7. blue racecar by sassy 009
The Hitlist »

Minneapolis 2021 Election Recap
In this special episode of Real College Podcast reporter Isaac Maruyama takes the reins once again to bring you a breakdown of the election results! Coming up we have a look at which ballot measures passed, how ranked choice voting played out in the mayoral election, a look at each ward's City Council election results, and a rundown of the Board of Estimate and Taxation, and Park Board's election results!

EP 117: The Sports Hour
On this week's episode, Conner, Mae and Jason discuss their Thanksgiving weekends and all things Gopher Sports. Later, Jack Bartlett joins the show to go in depth on the Gophers' big W over the Badgers and other news around college football.